The Radials were the largest fleet with 40 competitors taking to the water with the title undecided going into the last race.  Peter Fagan won out from a very tight grouping with single points separating Aisling Keller (LDYC/RIYC) in 2nd (also 1st Lady) and Aoife Hopkins (HYC) in 3rd place.  All three sailors shared all but the last finishing gun with the last race being won by Nicholas Reeser from Lauderdale YC/NYC. In the Master category Sean Craig (RStGYC) took first prize.  Jess Winton (Ballyholme YC) won the Silver fleet.

Ewan McMahon (Howth YC) dominated the Standard rig with four wins and a 2nd place.  Ronan Wallace (Wexford HBTC) was very consistent with a string of 2nds and 3rds and a final race win to finish 2nd overall.  There was a great tussle for 3rd place with David Quinn (HYC) in 3rd holding off the challenge from Paul McMahon (HYC/KIORA) in 4th. David Quinn won First Master with Ross O’Leary Second Master and John Simms third.

Excellent race management under PRO David Lovegrove ensured three races on the Saturday despite the tricky conditions which included one wind shift of 180 degrees. All six of the scheduled races were completed.

The organisers were most grateful for the huge turnout at the BBQ on Saturday evening.  A free raffle for competitors saw Dylan McEvoy (HYC) win a voucher for boat insurance from CraftInsure with delighted Glen Fisher (RStGYC) winning the top prize of a new Radial sail.

The event concluded with a prize giving.  After some short speeches the main prizes were presented by Vice Commodore Ian Byrne. The prizes were sourced from local artist Carol O’Mara which were much appreciated.  Silver fleet prizes sponsored by CH Marine for the Radial and 4.7 fleets were highly sought after.

HYC and the competitors are most grateful to the generous sponsors who were BKS & Co, CH Marine, CraftInsure, Gallagher Quigley Estate Agents, Investwise and McMahon Design & Management who ensured a successful event.

Full results can be found at www.laser-ireland.com in the News section.  Prizegiving photos are available on our facebook page. 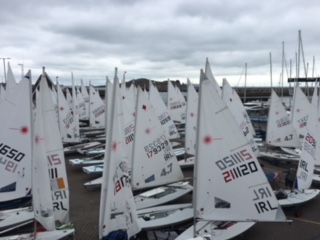