As reported in AFLOAT.IE

The ILCA/Laser Ulster Championships took place at Strangford Lough Yacht Club at the weekend. Over twenty individual clubs were represented from all four provinces, showing the continued strength of the class throughout the island of Ireland, with all age categories represented from youths through to great grandmasters.

Saturdays South/South Westerly proved tricky for the race committee as the wind shifted this way and that off the land in a breeze which averaged around ten knots and hit up to twenty-two knots in the brisk squalls. Nonetheless, RRO Angela Gilmore and ARO Scott Rogers persevered and served up three races for all three ILCA rigs.

In the ILCA 4’s, Krzysztof Ciborowski (RSGYC) was the leading overnight sailor on three points, with Hannah Dadley Young (BYC), Daniel O’Connor (RSGYC) and Daniel Palmer (BYC) in a three-way tie on four points each.

In the ILCA 6’s, Benjamin Reeser (NYC) led on two points, with Sean Craig (RSGYC) in second on three points and Lucas Nixon (BYC) in third place on five points.

In the ILCA 7’s, Conor O’Farrell (CLYC) led overnight on five points, while Gavan Murphy (RSGYC) and Dan Sheriff (BYC) were tied on seven points for second and third.

What started with a glorious Westerly in ten to fifteen knots on Sunday soon turned out to follow a similar weather pattern to the Saturday with very shifty conditions coming off the shore.

Nonetheless, the race committee persevered and managed to squeeze in a series, thanks in no small part to rib drivers and their crews, who were busy moving marks and start lines throughout the day.

In the ILCA 6’s, Benjamin Reeser (NYC) continued his overnight form and took the win, while Lucas Nixon (BYC) came flying out of the blocks with two first-place results to take second overall from Sean Craig (RSGYC), who finished third overall.

In the ILCA 7’s, Conor O’Farrell (CLYC) remained true to form and maintained his overnight lead to take the win overall from Colin Leonard (SLYC) on count back, with Gavan Murphy (RSGYC) in third overall.Published in Laser 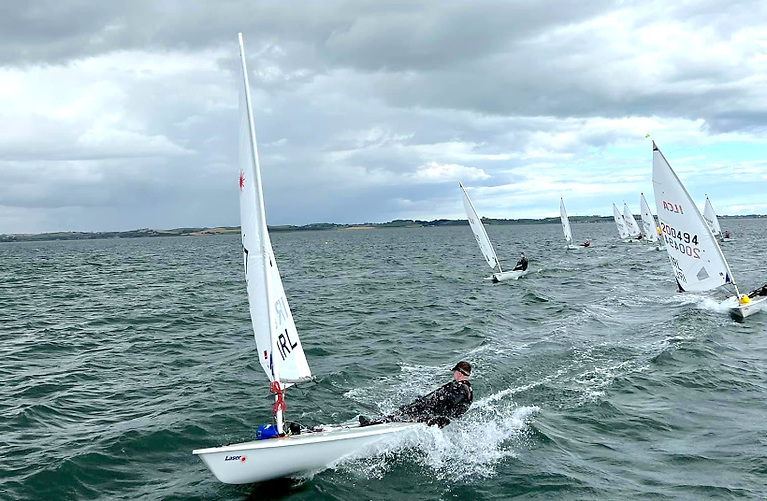